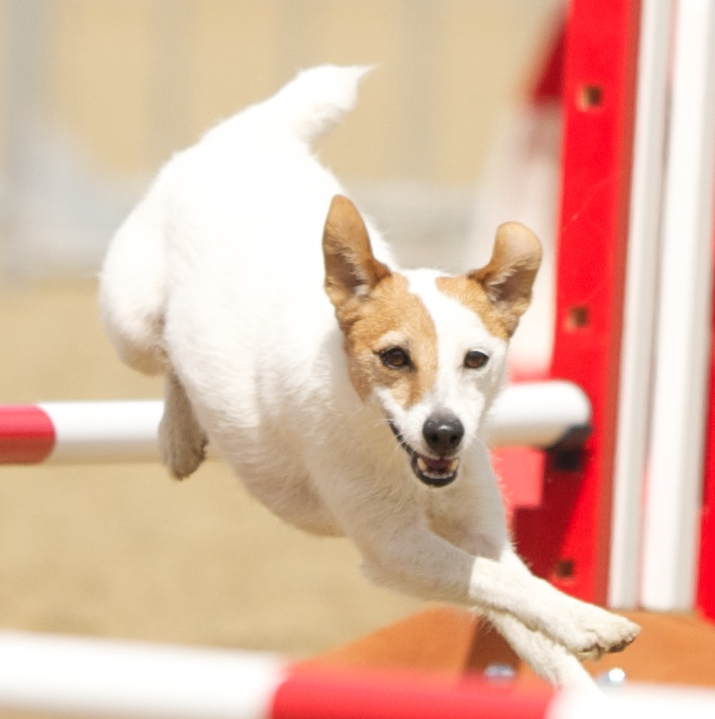 Students must be pre-registered for classes or be pre-approved by the instructor to drop into a class.

The training program at HMBDS is focused on preparing dog and handler teams for competition. While you may not be sure if you will want to compete in agility with your pup, please know that by joining a class you will be committing to training outside of your weekly class in order to keep up with the class progression. Our agility program is focused for students that have goals to compete at the local, national and international levels.

We offer a variety of levels of classes to suit every dog and handler.  Whether you are new to agility, are an experienced agility competitor and have a new puppy starting out in agility, or a seasoned dog and handler team wanting to master their skills. We can help you reach your goals. Our classes typically run for a 6 week session and start dates and times vary according to instructor.   Some instructors are also available for private lessons.  Private lesson rates may vary per instructor.

Visitors allowed by appointment only

How do I start?  Just follow these steps below!

Download our student agreement form.  The document will explain rates and facility rules. Please sign and return this form to us via email.

We don't want to brag (but we will!), but our instructors are top notch! They come with years of competing at the highest levels on the national and international stage.  They are eager to share their knowledge and expertise with you!

Click below for the current class schedule. Class schedule may vary at times due to student demand. If a class time and instructor interests you, just let us know and we will do our very best to fit you in. 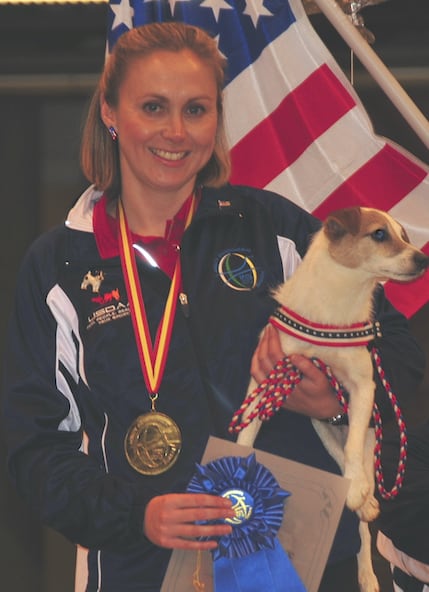 My agility addiction began in 1996 when I started training my Dalmatian, Reese.  In 2005 I started competing with my JRT, Dasher. Dasher was my first JRT and I fell in love with the breed’s personality and drive. It was not long after I had Dasher that I adopted my 2nd JRT, Zip from Talbot Humane (local shelter). I currently have 3 JRT’s and a toy poodle, Roxy, to our pack.

I follow the One Mind Dogs methodology and am a One Mind Dogs Assistant Coach. I am also a strong believer in clicker training, play and positive reinforcement to create drive and a strong bond between dog and handler. 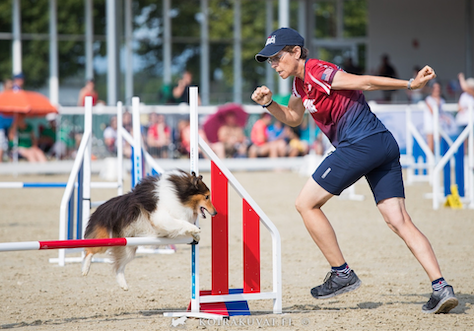 Marcy discovered agility in 1996 with her very first dog, Shetland Sheepdog, Merchant. He earned a CDX, and HT in his more senior years, and was very close to earning his MACH. He continued to compete in agility past his 12th birthday, but was forced to retire due to a chronic shoulder injury.

Stripe is Marcy’s current competition Sheltie. He has been a 2-time IFCS World Team member, winning a Silver Team medal in Italy in 2015. And, winning an Individual Bronze medal in Gamblers at IFCS in the Netherlands in 2016. Stripe also holds several National titles: 2015 Cynosport Grand Prix Champion. 2016 Steeplechase Champion. 2017 Westminster 16” Champion. He is a 4-time AKC National finalist finishing in 2nd pl in 2016, and 4th pl in 2019. Stripe has also had the honor to represent the USA 2-times at the FCI Agility World Championships, and 6-times at the European Open Championships. Stripe has competed in 17 International agility competitions, and, most recently finishing in 4th place at the Hungarian Open Championships.

Marcy’s next agility dog is a very fun, active and young Sheltie, named Chia, who was imported from Italy.

In addition, to Marcy’s love for agility she holds two degrees in design.The first is in Interior Design, and the other in Graphic Design. She also enjoys photography, chocolate, and most anything design related.

Marcy has a keen eye for detail, and, is very patient in her teaching method. She is extremely passionate, and, enjoys working with individuals by breaking down skill into the smallest of components. 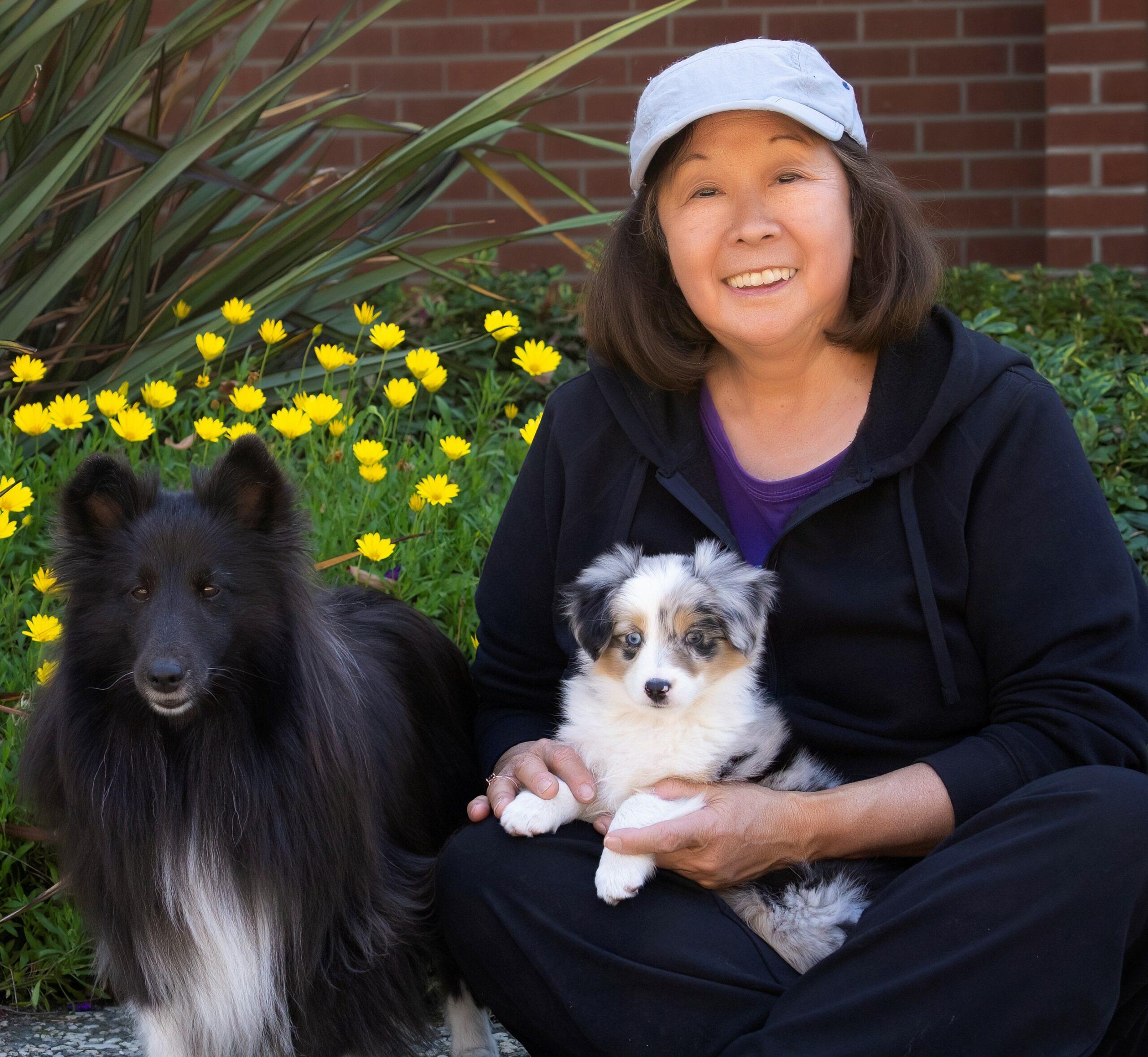 Dorothy has been teaching since 1977, first as a high school mathematics teacher and then starting in 1984 as a mathematics lecturer at California State University East Bay in Hayward CA. She has a Bachelor of Science degree in mathematics and a Masters degree in Teaching of Mathematics. In addition to a full time position at Cal State, she started teaching agility in 2006, joining Jumpn Java Agility (now Half Moon Bay Dog Sports) in 2009. She retired from Cal State East Bay in 2018 and now teaches agility full time.

Dorothy is a Certified Pet Dog Trainer (Animal Behavior College) and a graduate of Trish King’s Canine Behavior Academy. She is also a Certified Flight Instructor and taught flying in the bay area for 20 years. Her love for aviation is reflected in her dogs’ names. Pre-agility dogs were named Aileron and Flaps. Her first agility dog was Cessna who earned MACH 4 and was a Cynosport Performance Grand Prix finalist in 2008 where she placed 3rd.

Her next agility dog was Piper. He was USDAA Regional Performance Grand Prix Champion (2009 and 2014), USDAA Regional Performance Steeplechase Champion (2016), USDAA Performance Steeplechase Finalist at Cynosport (2016). In AKC, Piper earned his MACH 5 and PACH titles. He made it into the Challenger Rounds at AKC Nationals in 2010 and 2011. He was an AKC Nationals Finalist in 2012 and 2014 where he placed 5th.

Currently, Dorothy is competing with Christy (named for the Christen Eagle aerobatic biplane). Christy was USDAA Western Regional Steeplechase Champion in 2016. In AKC, Christy has earned her MACH 3 title. She was an AKC Nationals Finalist in 2017 where she placed 4th and also in 2018 where she placed 2nd.

David has been competing in Agility since 2011, when he started with his Border Collie Lance. In 2013, he was fortunate to team up with Border Collie  Snips, with whom he has competed on both the international and national level with several trips to the finals and the podium. Together, they won the UKI US Open in consecutive years (2016/17), competed with the Bronze-winning Team USA at the WAO in 2017 and were alternates for the WAO team in 2019. He's currently working with yet another Border Collie, Kyber, who is in the very early stages of her competition career. 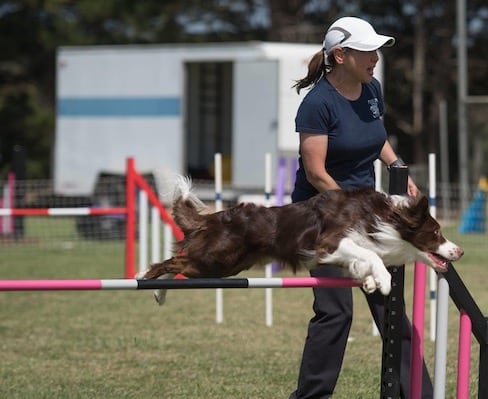 Karla has been involved in agility for several years.  She has a great eye for detail and her positive attitude is the reason her students flourish under her.  Karla is a great asset to our team. 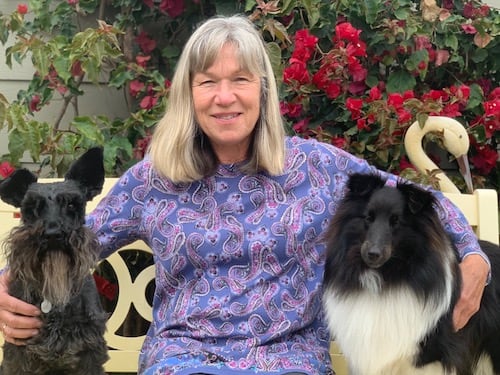 Carol has been running with her dogs in agility since 2005 and has enjoyed all performance dog sports. Her first agility dog was Winston, a Miniature Schnauzer, who in addition to achieving his PACH in 2013 was accomplished in Obedience  (Utility title), Rally and Tracking.  Cassi, her Sheltie, achieved her PDCH in 2016 and was a semifinalist at USDAA Cynosport in 2014.  Presently her Miniature Schnauzer Vinnie is competing at the Master's level and her young Sheltie is in training .  Carol has taught Introduction classes since 2013 and is presently teaching a Novice level class.  She has practiced as a Pediatric Nurse Practitioner most of her life and brings the qualities of patience and positive reinforcement to her students. 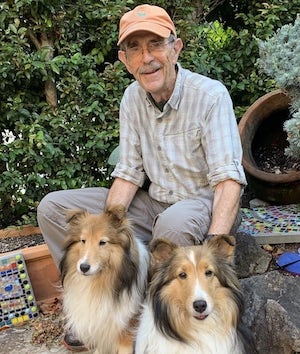 Stu has been successfully competing with his Sheltie Aleigh since 2010. She proved to be a natural agility dog and essentially helped him with her abilities. He became interested in helping other handlers learn about agility and assisting with perfecting their techniques, and started teaching in 2012. He currently is involved with Half Moon Bay Dog Sports' Introduction to Agility program, conducts private sessions and substitutes for the other instructors. His current focus is on preparing Aleigh’s offspring, Hollie, for competition and has discovered that no two dogs are the same; she’s a handful. 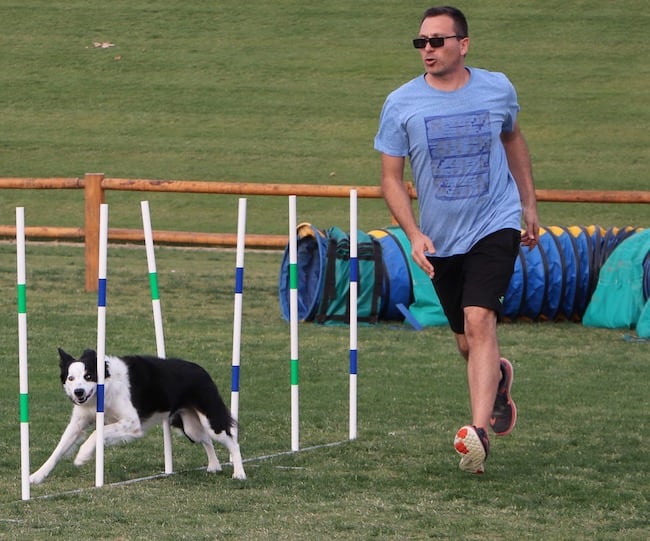 Taner discovered agility with his first border collie, Safir, in 2014; and he has been addicted to it since then. His passion and dedication for agility brought him up to a competitive level very quickly.

When he got his second border collie, CODE, he taught and trained him himself, and he qualified for our first World Team tryouts where he got 5th place in round 4 and 12th place overall. He qualified for his first EO tryout in 2019 as well, when he was 3 yrs old. He made it to the podiums both in USDAA Western Regional and UKI West Coast Cup in 2019. He also won an ISC event in which the world-famous judge Tamas Traj designed the courses and judged the runs. He is looking forward to competing with him at both national and international events in 2021.

His 3rd border collie, ICE, came to his life unplanned. He was our friend’s dog and he was training him whenever he had time. When his friend needed to move back to Europe, he could not let him go; so, he became his family member. He am looking forward to introducing him to the agility world in 2021.

He love teaching agility foundation and the international style of agility. He follows the new trends and methods around the world very closely to keep himself and his students up to date and to teach better.

Apart from dog agility, he is a molecular and cellular biologist teaching multiple online biology classes at international universities. He obtained his BS and PhD in Germany, and he has worked as a scientist in biotechnology in the Bay Area for 10 years. 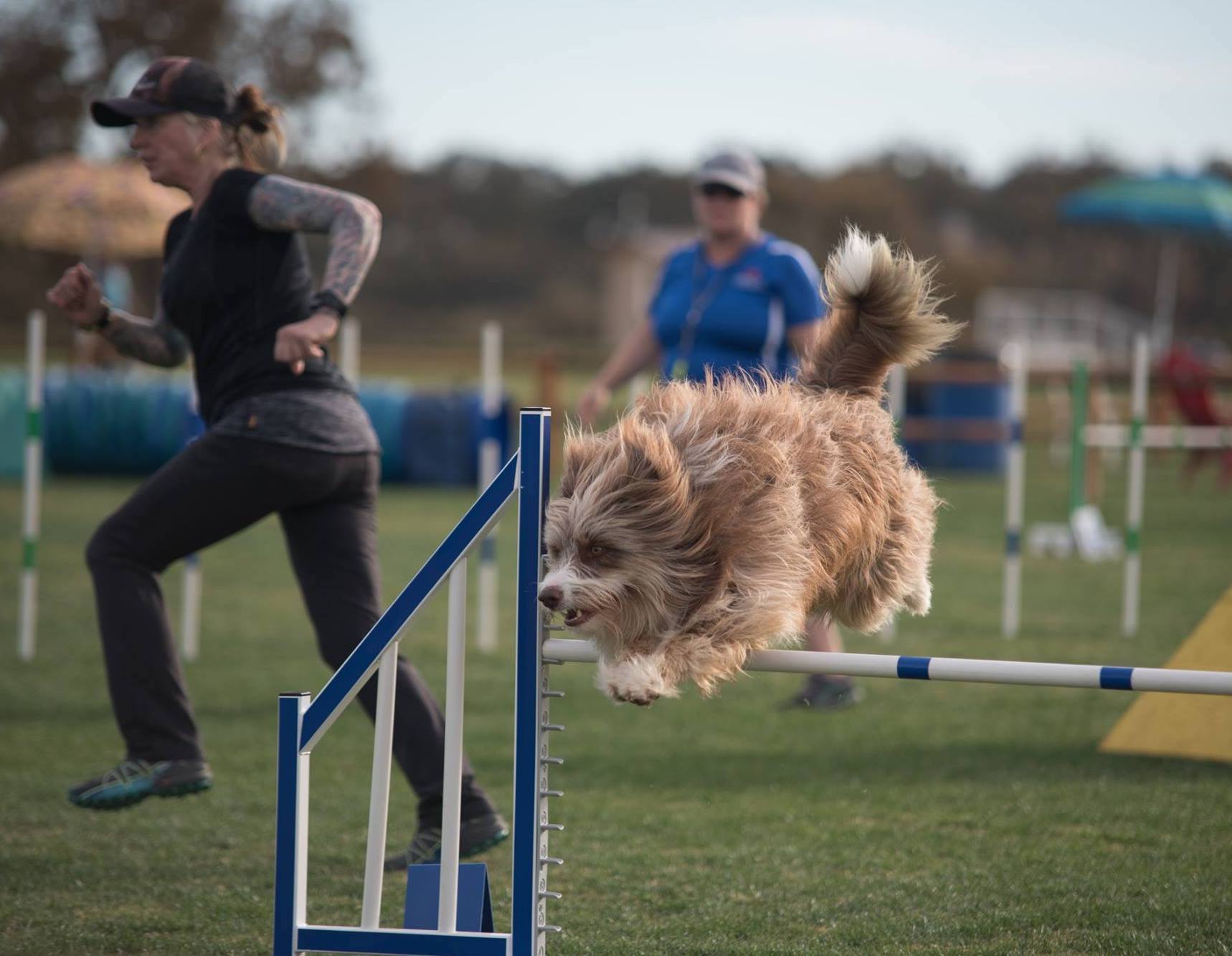 Dianne Morey has been a professional dog trainer for over 20 years. But her love of dog training started very early life. She and her dogs Charlie and Manfred would put on performances for the neighborhood families and summer tourists in the northern Michigan fishing village she grew up in.

She's an honors graduate of the Dog Trainers Academy and a Certified Canine Fitness Instructor. She was a staff trainer for the SFSPCA, a court appointed expert witness for SF’s vicious and dangerous dog court and ran a successful pet dog training business. In 2010 she shifted her training focus solely to dog sports and joined the team at Ace dog Sports sf location.

Dianne and her dogs have trained and competed successfully at both the regional and national levels in a number of dog sports including rally, nosework, disc, obedience, dock diving, barn hunt, herding and of course agility. Dianne and her dogs have also performed at sporting event halftime shows,birthday parties and trade shows.

Her first dog sport teammate was a working bearded collie named True who she adopted from a rescue group when he was 5 ½ years old. A profoundly fearful dog True went on to become a jolly and confident king of a dog who got Dianne hooked on dog sports. He was also a certified therapy dog who worked with memory loss patients.

Dianne continues to be an enthusiastic student of dog training. She is continually taking classes in person and online, attending workshops, seminars, learning the newest handling approaches, exploring new sports and refining and polishing her skill set.

Dianne’s current family of dogs includes her 12 ½ year old cattle dog Zero, a wild and hilarious border collie puppy named Wheelie and her current agility teammate the wonderful Super Sic, a 6 year old working bearded collie. Super Sic has had a fast, fun and successful agility career. One of his competition highlights was in 2019 when he earned second place in finals at the UKI US OPEN National Agility Championship.